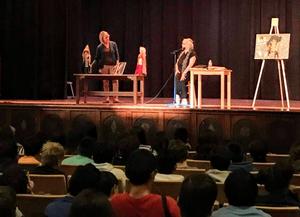 Trudie Strobel is originally from Poland, and survived the Holocaust with her mother.  First they were imprisoned in the Jewish ghetto in Lodz, and then moved through a series of concentration camps.  After they were liberated at the end of the war, they lived for a time in a resettlement camp in Germany before moving to the United States. Trudie became a notable textile artist, using intricate embroidery to create pieces of art with religious, cultural, and historical themes.  Her work is exhibited in venues such as the Museum of Tolerance as well as in local synagogues.

Thank you to Betsy Kahn, SPMS Librarian, who helped organize the assembly for our students.